NEDO is a three-year project (2016-2019) of smart grids and smart communities, in which the main partners are NEDO, Japanese agency for advanced energy and industrial technologies, and its authorized Hitachi operator and company ELES, d. o. o., the system operator of the transmission grid.

The ELES project is managed and coordinated by the company, whereas the activities will be carried out on the infrastructure of the owners of the electricity grid in Slovenia – Elektro Maribor plays a key role as a partner in the implementation of the project. NEDO contributes to the modern equipment of Japanese and Slovenian solutions providers, while ELES finances the development of advanced functionality, which will, together with the equipment, create advanced smart network infrastructure.

The benefits of the project from the electricity system perspective are in the use of advanced solutions that solve the challenges of the modern power system in the light of sustainable development through environmentally friendly solutions. Instead of investing in the expansion of the network, using the existing secondary equipment, information and communications technologies and cloud solutions will make better use of the existing network. Consumer awareness and the use of advanced electricity management systems will aim at the efficient use of electricity.

Key equipment to be contibuted by the Japanese partner, is the system power storage, advanced network management tools (DMS), advanced tools for optimizing the use of electricity in local communities and buildings (EMS) and a platform for integrating system services into the system. In addition, some missing passive (measurements) and active (circuit breakers, control transformers) elements in the network should be provided.

The result of the project will be an advanced infrastructure, that will help ELES fulfill the legally required obligations and improve the quality of services for electricity consumers using sustainable and environmentally friendly solutions.

The results of the program for the adaptation of deliveries that will be obtained through the NEDO demonstration project “MOVE CONSUMPTION« will be transferred to the whole of Slovenia after the completion of this pilot project.

Slovenian-Japanese demonstration project for smart grids and smart communities runs in cooperation with ELES, d. o. o., as a system operator of the Slovenian transmission network, and the Japanese agency for advanced energy and industrial technologies NEDO.

The induction/orientation of the latest technological solutions will be provided by the Japanese company Hitachi, and the Slovenian company Solvera Lynx, as well as other Slovenian companies, technology solutions providers and research organizations such as Elektroinštitut Milan Vidmar. Elektro Maribor, as a contractor for the tasks of the distribution system operator, plays a key role as a partner in the implementation of the project. TECES and LEA – Local Energy Agency of Spodnje Podravje cooperate in the local environment. The demonstration project »PREMAKNI PORABO« (MOVE CONSUMPTION) will take place from 1. 12. 2017 until 30.11.2018.

For successful implementation of the project, it is necessary to ensure active participation of network users. User collaboration is necessary in the pilot demonstration of the limitation and time delay of peak shaving, where users, the electricity distribution network operator and energy suppliers demonstrate that improved communication and co-operation can be managed with peak loads, thus reducing conical pick-up.

The aim of more proactive power management in the KKT period is that the electricity consumption is shifted from time in KKT to another time, thus allowing the optimum distribution of energy consumption over the day. Some examples are illustrated in the following pictures. 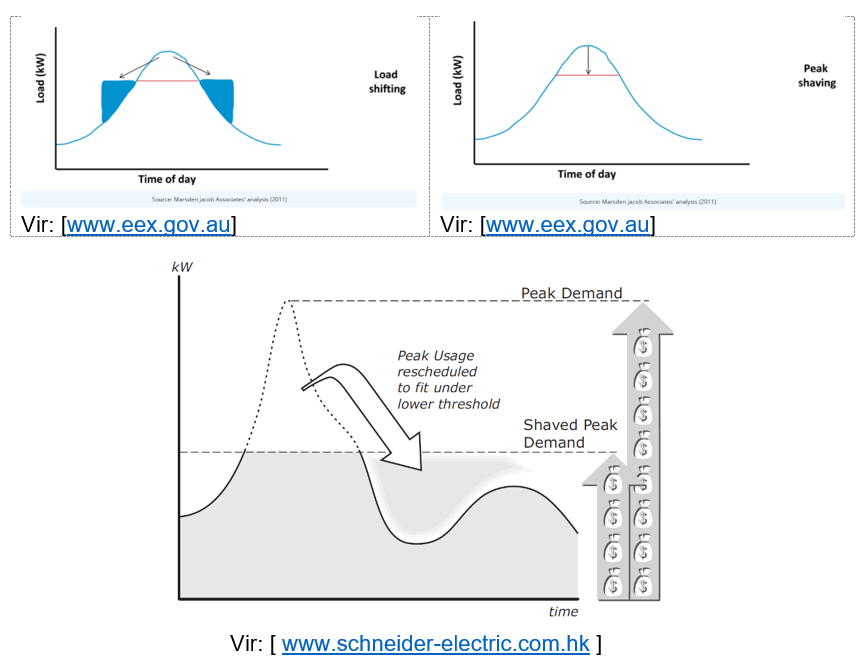 The objectives of the demonstration project »PREMAKNI PORABO« (MOVE CONSUMPTION) are:

-reduction of the peak load in the use of electricity;

– testing of electricity consumption savings on the basis of consumers’ involvement in testing      the introduction of smart meters for household and business customers of electricity.

Energy Agency’s requirement is that 10% of all 12,888 connected users should be included in the project on Breg RTP. So, our target group is 1,300 users or their measuring points (MP).

The possibility of cooperation is enabled for all households and small business customers who are connected to the distribution transformation station Breg (RTP Breg) in the municipalities of Starše, MO Ptuj – the district community Breg-Turnišče, Cirkulane, Videm, Podlehnik, Žetale, Hajdina, Majšperk, Makole, Kidričevo and are already in the advanced measurement system. Participation in the project is independent of the fact, with which electricity supplier they have a contract.

The Slovene-Japanese project »PREMAKNI PORABO« (MOVE CONSUMPTION) enables more reliable supply, and at the same time represents an opportunity for the domestic industry and lower costs for customers.

On the other hand, in the case of electricity surpluses, the project will stimulate the use of electricity just when it is also significantly cheaper (tertiary reserve). The involved participants in the project will be informed (SMS and via mobile application) at least 24 hours before the start of the KKT and 15 minutes earlier for the tertiary reserve.

KEY BENEFITS to be gained by project participants:

– the possibility of reducing the monthly electricity bill;

– free installation of a two-tariff system for measuring electricity consumption (if participants are in the Advanced Measurement System and they have a one-tariff billing);

– the possibility of participating in an international demonstration project for smart grids and smart communities of the future;

The demonstration project »PREMAKNI PORABO« (MOVE CONSUMPTION) uses slogans like “Be Active and Save!”, “The number of places is limited. Get your place as soon as possible. “,” Whoever registers before, is previously approved. ” to promote the project and promote the inclusion of the target groups.

More information on the project and its integration can be obtained from the website www.premakni-porabo.si or at the Local Energy Agency of Spodnje Podravje. 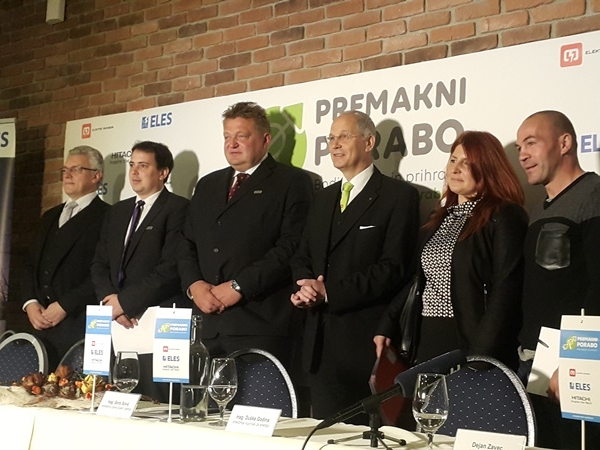 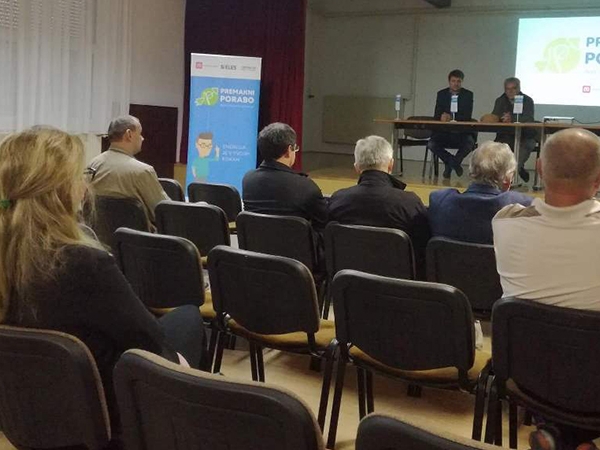 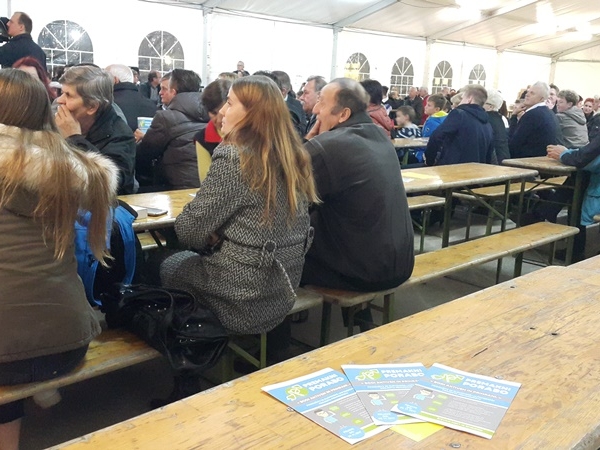 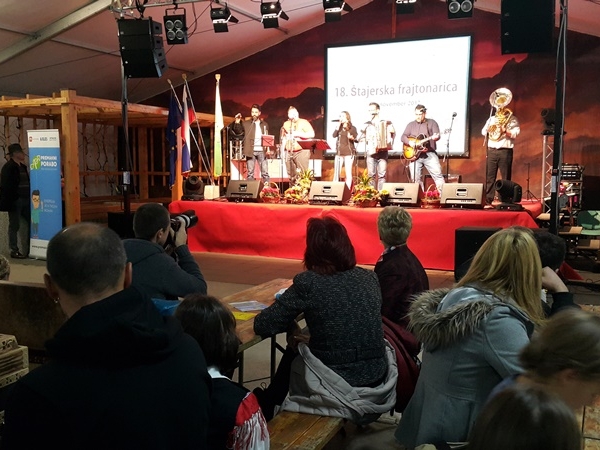 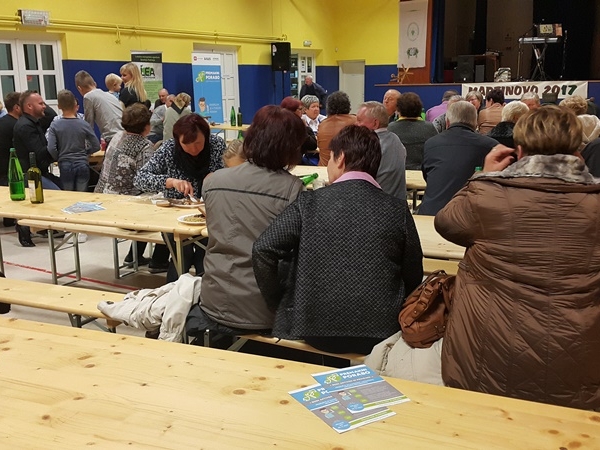 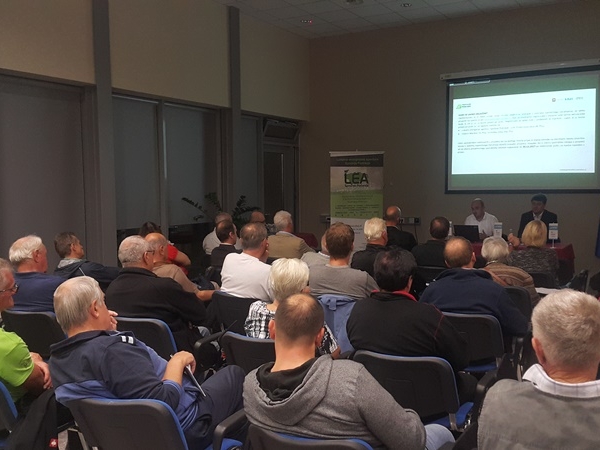 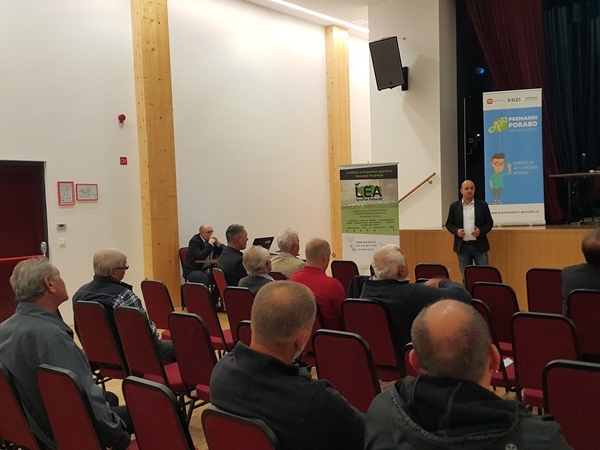 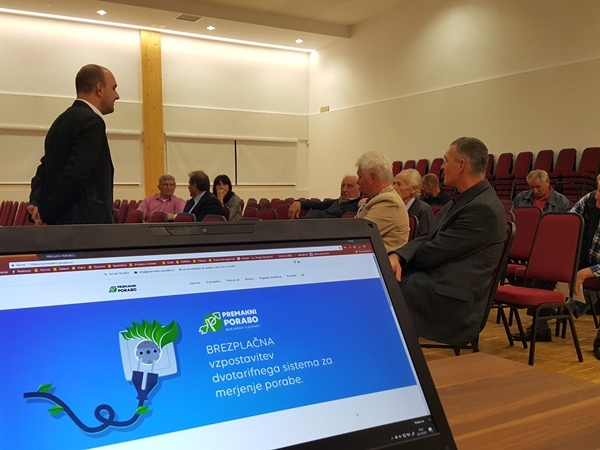 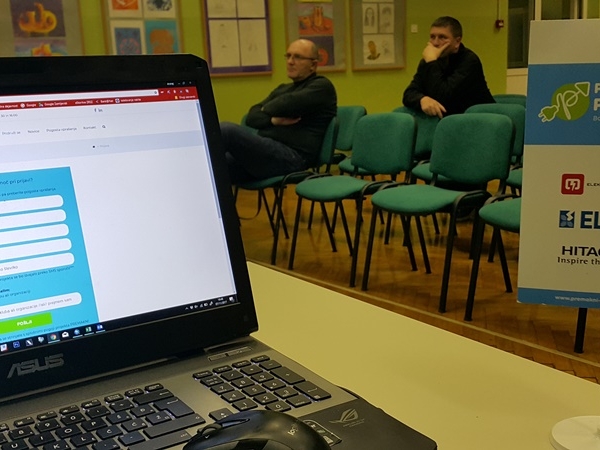 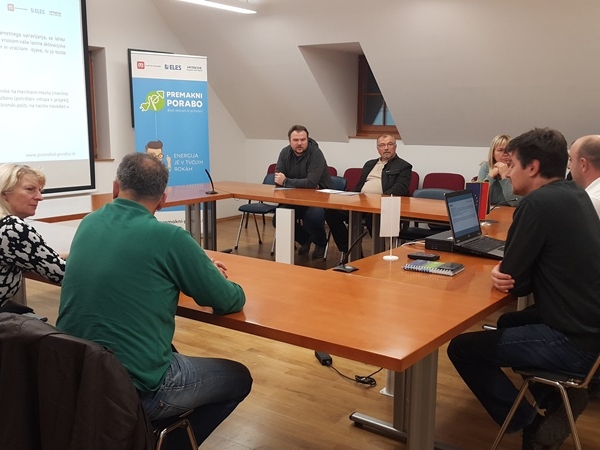